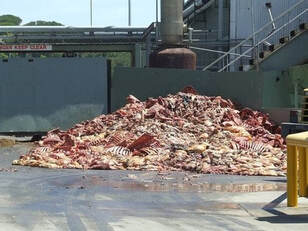 Regardless of the spring of 2007 largest ever pet food recall that resulted in the poisoning and deaths of thousands of dogs and cats across North America, my answer to this question, unlike many of my veterinary colleagues, I have come to believe that dogs and cats should not be fed most manufactured pet foods as their main or only source of nutritional sustenance.

I have come to this conclusion because of the dramatic clinical improvement in dogs and cats suffering from a number of chronic, debilitating, and costly health problems once they have been taken off highly processed commercial pet foods and are given naturally formulated, organic whole food diets appropriate for their species, age, physical condition, and activity level.

Scientifically formulated, manufactured pet foods are packed with chemical supplements used to 'fortify', i.e. make up for deficiencies in the basic ingredients that are slaughter house and food and beverage industry waste byproducts, and other chemical additives to flavor/taste-enhance, stabilize, preserve, color and 'texturize' ( appear like meat and gravy rather than a grey mush). According to a CNN News report on July 20, 2007, such supplements that are put into processed foods for human consumption as well as in to pet foods are not subject to any FDA inspection or oversight, and the government has no records as to country of origin of these additives/supplements.
​​Acidification of pet foods also resulted in an increased incidence of calcium oxalate uroliths/stones.

Oxidation/rancidification of pet foods and their ingredients during storage and transport is another problem. Most pet food manufacturers have recently phased out using BHA and BHT that were used for many years as preservatives in both human and pet foods. Animal tests have linked BHA to stomach and bladder cancer, and BHT to thyroid and bladder cancer. Pet food manufacturers now use 'mixed tocopherols' (a claimed source or form of vitamin E), citric acid, beta-carotene and Rosemary extract as preservatives. High levels of vitamin E, the most widely used antioxidant in pet foods today, can disrupt the activity of the other fat soluble vitamins, namely vitamin K (menadione), vitamin A (retinol), and vitamin D (calciferol), so these are often added as supplements to the formula, which is not without risk since vitamins A and D can be toxic at biologically excessive levels in the food.

There are additional chemical contaminants not listed on the pet food label that were associated with the production, processing, and preserving of the original sources of the primary ingredients like animal fat, chicken meal and cornmeal, including pesticide residues, animal drugs, ethoxyquin ( a known carcinogen) to prevent tallow from becoming rancid, and polyacrylamide used to coagulate slaughterhouse waste. Mercury compounds in fish products, and dioxins and PCBs in most animal byproducts are additional concerns, as is the lower nutritional value of conventionally grown crops compared to organically grown*.
​Genetically Engineered Crops

To claim that manufactured pet foods are scientifically formulated and are therefore safe and provide complete nutrition for growth and health maintenance is as incorrect as contending that genetically engineered crops and foods are 'substantially equivalent' to conventional crops and foods and are therefore as safe and as nutritious. The former claims have proven, year after year, to be patently false and misleading, as exemplified by the many animals becoming ill because of deficiencies in taurine and essential fatty acids, and from imbalances in calcium and phosphorus and essential trace minerals.

Pet food container labels include such statements as 'Animal feeding tests substantiate that this product provides complete and balanced nutrition for all life stages', or 'for growth and maintenance'. The science supporting the pet food industry is based not on veterinary nutritional science but on the animal production science of livestock feed formulation that relies on simplistic ingredient analysis and formulation as per the 'Guaranteed Analysis' on pet food labels that shows the percentage of crude protein, fat, carbohydrate, fiber and ash.

The list of supplements/additives is always longer than the list of the basic ingredients such as chicken meal, meat byproduct and corn meal.

Veterinary clinical nutrition is essentially applied after the fact, once feeding trials are conducted on basic low-cost ingredient formulations and then potential and reported health problems are corrected by the inclusion of various additives/supplements. Feeding trials to determine safety and nutritional values are not cost-effective and so are not done on a regular basis but should be with every new formulation and when ingredients from different sources are used.
​In actuality, standardization in terms of quality can be better established for synthetic, manufactured chemical additives/supplements than for the basic food ingredients. Yet this is not without risk considering the recent recall of pet food containing toxic levels of Vitamin D that caused systemic calcinosis in cats. Standardization of supplement/additive amounts, in terms of the quantity added to each batch of manufactured pet food cannot be established without knowing what is in the basic food ingredients, and that can vary widely according to supplier, time in storage, degree of prior processing etc. Plant ingredients, often contaminated with aflatoxin and other toxic molds, can be deficient in iron, zinc, selenium, magnesium, vitamin A and C, and lysine, among other essential nutrients and high in phytoestrogens, endocrine disrupting agrichemicals, dioxins, and PCBs, the latter being a serious problem because of bioaccumulation in animal-derived food ingredients.

Aside from bacterial contamination, notably with Salmonella and E. coli, animal derived ingredients can throw off supplement calculations when high in calcium, a common result of de-boning; high in contaminants like mercury, lead, cadmium, and arsenic;  deficient in essential fatty acids like omega 3, but high in omega 6; and deficient in zinc, selenium and magnesium. Fewer tests of primary ingredients would be needed for known-source and inspected, humane and organically certified producers and marketers of agricultural commodities for human and animal consumption. Tests on organic produce, both vegetable and animal-derived, have shown consistently higher levels of vitamins, trace minerals and other essential nutrients compared to conventionally grown crops.

The difference between naturally constituted whole foods and scientifically concocted manufactured pet foods can be seen on the pet food labels with a plethora of synthetic vitamins, amino acids and trace minerals of dubious nutritive value and origin (as from China) deemed essential because of the poor quality of lowest-cost basic ingredients, and because of the destruction/denaturing of essential nutrients due to processing, storage and cooking. Aside from the fact that major pet food companies are still selling predominantly cereal-based cat foods (e.g. combinations of corn meal, corn gluten meal, brewers rice, wheat, and soy flour), as 'complete and balanced nutrition for all life stages according to AAFCO animal feeding tests' which, for documented health reasons, is unethical, dog and cat foods can include the following non-nutritive additives:
​Red 2G food coloring has been identified by the European Food Standards Authority as a carcinogen, and other coal-tar and petrochemical-derived Azo dyes used as food (and beverage) coloring agents are now being re-evaluated.
​Gimmicky additions to pet foods include marigold and chicory extract, and touting chicken by-product meal as a 'source of chondriotin and glucosamine' in reality means that much of this ingredient is probably of low protein value because it contains a lot of cartilage and bone from the remains of ground up chicken parts not considered fit for human consumption.

It would be prudent for all pet food manufacturers, especially after the massive pet food recall in the U.S. in the spring of 2007 that resulted in the suffering of uncounted numbers of dogs and cats, to clearly indicate on the pet food container labels how they can be reached by pet owners and veterinarians with product related questions and concerns. Every new batch of untested pet foods containing either new ingredients or the same ingredients but from new sources should be appropriately numbered, and annual reports of any adverse food reactions should be available to veterinarians upon request, and filed with the appropriate governmental regulatory authority. All labels should also indicate the form of nutrient supplements, organic chelated minerals, for example, being better assimilated than inorganic minerals.

Effects on Cats and Dogs

Cats are notorious for becoming addicted to dry foods, and such foods, generally condoned by veterinarians because they believe the manufacturers' claim that the food is scientifically formulated and balanced for health and maintenance, and helps keep cats' teeth clean, can result in several serious diseases, from obesity and skin problems to diabetes and urinary tract problems. (See Elizabeth Hodgkins, DVM, Esq, "Your Cat: Simple New Secrets to a Longer, Stronger Life", published by St Martin's Press, NY 2007 for further documentation).
Both dry and canned dog and cat foods contain ingredients that can cause food-allergy or hypersensitivity, and may also lack essential nutrients that lead to various skin and other health problems. But because most veterinarians believe in what the pet food manufacturers claim, (and recent graduates are no exception when one looks at the funds provided to State and private veterinary colleges by the pet food industry), they rarely suggest changing their sick animals' diet. Instead they practice iatrogenic medicine, first by endorsing the continued feeding of potentially harmful diets, then by prescribing potentially harmful drugs and costly special prescription diets that are all too often useless and highly unpalatable.

Following the initiative of drug companies, major pet food companies now also endow Chairs and fund departments, lectureships and student fellowships and prizes at every veterinary college in the US, and around the world in countries where profits are to be made.

It is no coincidence that one of the biggest American pet food manufacturers in the U.S. is now selling Pet Health Insurance policies.
​