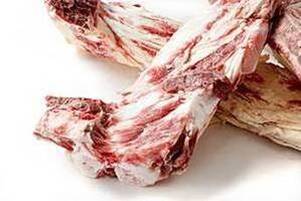 Crystals in a dog's urine can be painful and difficult to treat. There are two types of urinary crystals: struvite and oxalate. While oxalate crystals are generally treated surgically, struvite crystals can often be prevented or dissolved by the use of an acidic raw meat diet. This prevents the dog's urine from becoming alkaline or returns alkaline urine to its natural acidic state. Dogs with alkaline urine are at high risk for struvite crystals.
Why Struvite Crystals Form

Struvite crystals are made of magnesium ammonium phosphate. They most frequently form due to a bladder infection, which is often influenced by poor nutrition. Bacteria increase the pH level of the dog's urine, causing magnesium, ammonium or phosphate present in the urine to react with it and form struvite crystals.

There also is a likely genetic component to crystal formation. Certain breeds, including Dalmatians, have a much higher risk of forming crystals.

In all cases, a poor diet may contribute to struvite crystals in the urine. Poor-quality proteins that are hard to digest strain the urinary system by forcing the kidneys and bladder to flush excessive waste. Alkaline foods that promote alkaline urine can also help to cause struvite crystals. In addition, excess dietary magnesium added to processed foods can increase the likelihood of crystal formation.

A raw meat diet can't change your dog's genetics or eliminate urinary bacteria, but it can eliminate nutritional causes of struvite crystals. Feeding acidic raw meat products will prevent alkaline processed foods from affecting urinary pH. A dog's digestive system is designed for a diet of primarily raw meats with a small amount of vegetable matter. Feeding this natural diet prevents excess waste and the accompanying stress on the urinary and digestive system.

To prevent struvite crystals, focus on feeding chicken, beef, pork and seafood. Non-meat ingredients that can be included in a raw diet to prevent struvite crystals are eggs, cottage cheese, rice, yogurt, beans and some nuts. Remember, the vast majority of a dog's raw diet should be meat, bones and organs. Non-meat ingredients should be considered extras and fed accompanying a meal of meat.