NEVER give your dog Spinosad and Ivermectin at the same time.
​
Effects are DEADLY!!

The EPA issued an advisory a couple years ago about spot-on products after receiving over 44,000 reports of adverse reactions, including 600 deaths. Don't be another statistic. 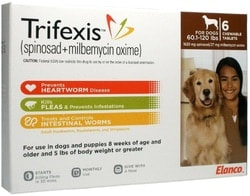 I've read hundreds of complaints of severe illness and death directly caused by the flea treatments Trifexis, Comfortis and Assurity.

All three contain Spinosad and/or Spinetoram  which is a toxic metabolite made from the bacterium  Saccharopolyspora spinosa.

Fleas are now resistant to most pesticides. So new, more toxic pesticides are now being marketed to use internally and externally on our pets.

Trifexis is an internal pesticide marketed for dogs. Trifexis is a combination of Spinosad and Milbemycin oxime. Comfortis is an internal pesticide (Spinosad) marketed to dogs and cats. Assurity is a topical pesticide (Spinetoram) marketed for cats.
​Assurity for cats causes their fur to fall out and cats have also torn their fur out themselves after being treated with Assurity. Cats that have torn their fur out ingested the pesticide resulting in becoming gravely ill.
The pets die exactly like the bugs do. They seize, convulse, are paralyzed and die.
Please err on the side of caution and don't use these (or any OTC) toxic flea treatments on your pets.

We need to email, phone or write the FDA and tell the chemical & pharmaceutical companies that we REFUSE to POISON our pets in order to kill fleas.

Pharmacokinetic interaction of the antiparasitic agents ivermectin and spinosad in dogs
Whereas spinosad pharmacokinetics were unchanged in the presence of ivermectin, ivermectin plasma pharmacokinetics revealed a statistically significant increase in the area under the curve (3.6-fold over the control) when ivermectin was co-administered with spinosad. The majority of the interaction is proposed to result from inhibition of intestinal and/or hepatic P-gp-mediated secretory pathways of ivermectin. Furthermore, in vitro Transwell experiments with a human multidrug resistance 1-transfected Madin-Darby canine kidney II cell line showed polarized efflux at concentrations ≤ 2 μM, indicating that spinosad is a high-affinity substrate of P-gp. In addition, spinosad was a strong inhibitor of the P-gp transport of digoxin, calcein acetoxymethyl ester (IC(50) = 3.2 μM), and ivermectin (IC(50) = 2.3 μM). The findings suggest that spinosad, acting as a P-gp inhibitor, increases the risk of ivermectin neurotoxicity by inhibiting secretion of ivermectin to increase systemic drug levels and by inhibiting P-gp at the blood-brain barrier.

​​A warning if you use Trifexis for flea/heartworm control

​I’m not sure if it may be a breed-related thing or not, but I wanted to let you know about a very disturbing adverse effect my Cricket suffered after being given Trifexis (flea and heartworm preventative).

She had been on it for several months with no issues. Last week, she was given her monthly pill with dinner (as indicated) and everything appeared fine, no vomiting or other issues. About 4 hours later, we noticed some odd behavior and "spaciness".  She would sit up and hold her head straight up as though staring at the ceiling. I initially thought she was sniffing intently at something, but she was just extending her neck as far as possible and staring up at the ceiling. She would open her mouth up every so often, and would also take a large gulp, and I was concerned that she had swallowed something or was trying to clear a blockage in her ears. She grew very uncomfortable and could not lay down–she kept sitting up so that she could hold her head up.  She was lethargic but could not lay down or rest. I actually did not connect the behavior to the Trifexis until I looked up the behavior online and saw that some people relayed similar issues a few hours after administering it. I realized it had to have been related to the medication. I contacted poison control, as well as the emergency vet, and we took her in, although it did not appear she had any breathing or choking issues, nor did she seem to be having a seizure.

​By the time we arrived at the Vet’s office, she slowly seemed to be improving, and once she was in the exam room, she had been able to relax her neck enough to finally lay her head down.  The vet did a thorough exam but could find no explanation for her earlier symptoms, but could also not say definitively that it was caused the Trifexis.

She came home and immediately went to sleep, with no further issues. She appeared totally normal the next day, with no residual effects. I reported the incident to Elanco, the manufacturer, and I do have to say it was handled professionally, and it will be reported to the FDA, per their procedures. They also reimbursed my vet visit, as well as the remaining doses of Trifexis. I do hope, however, they will consider adding this side effect to their labeling–at this point, it is not mentioned as a side effect, but they are aware that it has happened to others (not necc. Tibbies). I also hope that there are no lasting effects from it, as it will remain in her system for the next 30 days, but she seems to have fully recovered. Needless to say, I will be switching back to something else now.

​NEVER give your dog Spinosad and Ivermectin at the same time. Effects are DEADLY!!

​Call the number below if you suspect poisoning of any kind. Do not wait till the next day.
Hours can mean life or death. 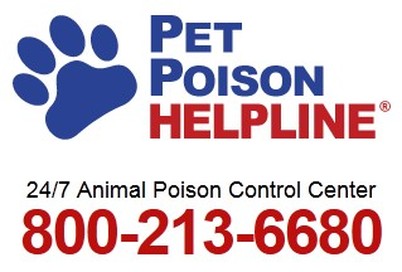 ​Spot-On Pesticides such as Frontline, Effitix, Zodiac, ProMeris, Defend, Bio Spot, Adams and Advantage, &  Simparica trigger adverse reactions in dogs and cats, shorten life spans, cause terminal illness, and premature death.  The active ingredients in these solutions include chemicals such as imidacloprid, fipronil, permethrin, methoprene, and pyriproxyfen, all of which have caused serious health problems in animals in laboratories. Even some of the inert ingredients can be hazardous to your animal companion's health. Are you poisoning your pet? Other forms of flea control powders, collars, and sprays are no less dangerous to you or your companion animals. Labels may warn not to get these substances on your skin, to wash your hands after applying it, and to keep it away from children, yet these chemicals are absorbed by your animal's skin. Immediate effects of pesticide overdose include vomiting, diarrhea, trembling, seizures, and respiratory problems. If your dog or cat shows any of these symptoms after the application of a pesticide, immediately wash the product off and seek veterinary care.

Dr. Brandon Brooks, DVM - "Many (if not most) Over The Counter (OTC) or non-prescription flea control products are very toxic to cats and kittens- especially the ones only approved for use in dogs. Many people mistakenly buy these for their pet (it's not always their fault, the companies that make them want you to buy it, they don't really care about the dangers involved) so it pays to be extra careful when buying flea control products." Our animals are sicker than ever. Veterinarians have never seen such an increase in the rate of liver disease, nervous system disorders, cancers, diabetes, renal failure and other diseases. Our animals are being routinely poisoned with pet food and pet medicine. Popular anti-flea and anti-tick medications are extremely toxic to the liver. According to Dr. Brooks, even though the cat or kitten does not have the OTC flea control product directly applied to it, the cat or kitten may still become ill through indirect exposure if it is applied to a dog in the household, household furnishings, bedding, etc.. Also, many OTC dog flea control products are not only toxic to cats, but dogs as well.
​Hartz Flea and Tick Products

The principal ingredient in Hartz brand Flea and Tick products for cats is a 40-year-old chemical pesticide called Phenothrin. Although long since banned for use as a lawn pesticide, due its toxicity, Phenothrin constitutes over 85% of the total ingredients in Hartz Advanced Care Plus topical flea and tick drops for cats. The EPA has been reviewing pesticide risks in pet products only since 1996, and because the agency is backlogged, many pet products containing potentially harmful pesticides still make their way onto store shelves. Despite multitudes of well-documented cases of Hartz Flea and Tick Products causing injury and death to many innocent pets, Hartz Mountain Corp. continues to deny any wrongdoing and insists that its products are safe. Evidence against the safety of Hartz Flea and Tick products continues to grow rapidly. TV news channels have ran numerous reports on the problem and a class action suit has been filed against Hartz Mountain Corp. by the law firm of Faruqi and Faruqi, LLP and Squitieri and Fearon, LLP. However, these deadly products are still being sold in stores across the nation and remain well within the reach of unsuspecting consumers who are unwittingly putting their beloved pets into harm's way.

A Pesticide collar is nothing but a poison necklace around your pet's head. It emits a constant toxic cloud that your pet inhales, and so do you, every time you hug your pet. What about those insecticidal flea and tick shampoos and powders, sprays and dips? Labels warn you not to get any on your skin, use rubber gloves and wash your hands! Yet, they are rubbed into your pet's skin and then are licked by your pet! Signs of pesticide overdose in your pet can include vomiting, diarrhea, trembling, seizures and respiratory problems. Flea Collars: The Cancer Prevention Coalition (CPC), which informs the public about preventable exposures to carcinogens, list many brand-name products as containing either carcinogens or neurotoxins, or both. Avoid flea collars by Longlife, Hartz, Pet Agree, Sergeants and Zodiac. Flea and tick dips, sprays, powders, foggers and bombs: click the headline and scroll down the new page to learn more about how to control fleas without resorting to chemicals. 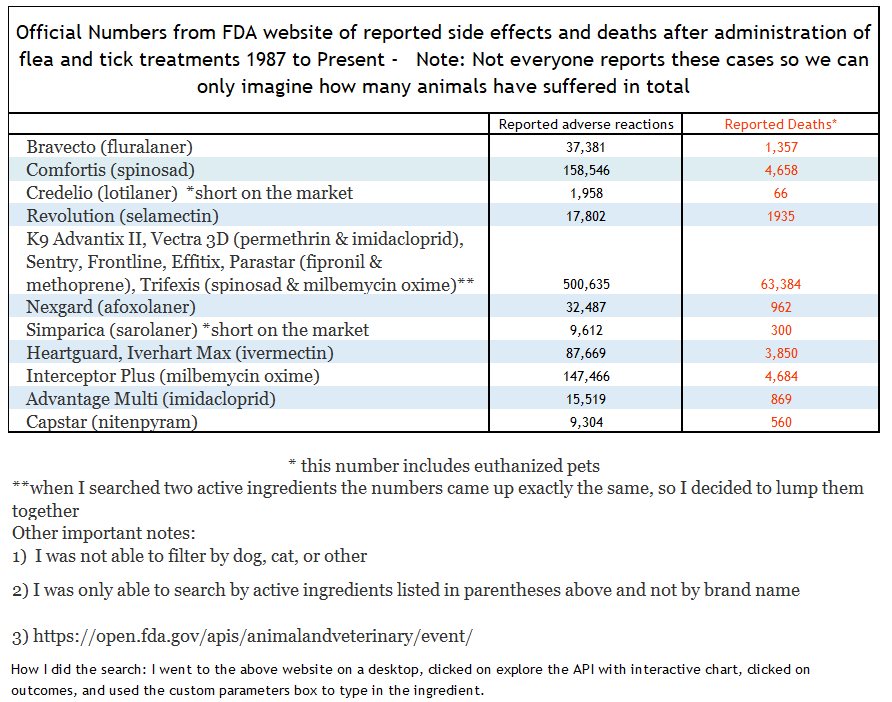 ​Pesticides in our animal's food

According to Consumer Reports, January 1998, there are 9,700 pesticides in existence, and in 1995, U.S. farmers applied 566 million pounds of pesticides to major fiber and food crops. Last summer, the U.S. Geological Survey announced the first results of a massive study of pesticides in 5,000 water samples from wells and rivers. Half the wells--and nearly all streams--contained at least one pesticide."

Carolyn Swicegood has excellent articles on the adverse effect of pesticides on parrots and the incredible health benefits of feeding organically grown food. While she writes about parrot's sensitivity and susceptibility to being poisoned, the information also applies to our dogs, cats, and any animal on earth, including us, humans.

Veterinary Malpractice - "Of the tens of thousands of veterinarians practicing in the United States, many are incompetent, careless or both. Others fail to deliver adequate care because their singular focus on profits makes them unwilling to pay for qualified employees, equipment, supplies, etc. I have even known of one vet who diluted her euthanasia drugs and another who re-used single-use surgery supplies. Unnecessary deaths and suffering have become commonplace."

You cannot poison your animal into health with drugs, chemo or radiation. The holistic approach treats the whole animal, ignites the body's internal healing force and stimulates the body's natural abilities to heal itself "

Health can only be achieved with healthful living" ​