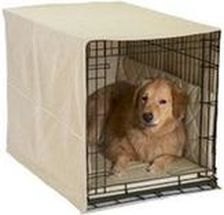 Many dog owners adamantly refuse to kennel their pet for any reason, feeling that kennels are too confining and the equivalent of sending a dog to prison. And as it turns out, they may be on to something…

A new study published last month in the journal Physiology & Behavior suggests that kenneled dogs can show signs of severe distress that are common in mental illness.

This group was selected because police dogs are sometimes kenneled after their work shifts. The kennel these dogs were in had a 40-dog capacity and was equipped with a run and an enclosed rest area.
​The dogs were also observed combining behaviors, which often occurred following certain triggers like the arrival of their human caretakers at mealtime.

The vast majority of the study dogs – 93 percent – engaged in some repetitive behavior, though it was more evident in some dogs than others.
​Study Provides No Clear Answers

The kind of obsessive, repetitive behavior the police dogs engaged in is linked in human medicine to a variety of mental health problems. Experts theorize that people who practice similar behaviors "live in a world of sensory confusion," according to Discovery News, or are attempting to use repetitive behaviors to blunt painful stimulation. Another theory is that these types of behaviors are the result of senses that are malfunctioning.

The U.K. researchers believe certain dogs may find separation from humans particularly difficult, which could explain their reaction to kenneling. Some dogs may also live in a state of chronic stress due to over-stimulated adrenal glands. However, some of the police dogs that seemed highly distressed based on their behavior did not have abnormally high levels of the stress hormone cortisol. This led the researchers to speculate that certain dogs may use repetitive behaviors as a way to cope in stressful situations.

The researchers recommend that more studies be done to determine if repetitive behaviors in kenneled dogs cause them harm.
​Perhaps if future studies reveal that dogs are psychologically damaged by kenneling, reputable breeders, show dog owners, trainers, and other dog-related organizations and industries will want to rethink how they manage and house the canines in their care. I predict we won't see much in the way of revolutionary alternatives to kenneling, but it will certainly be beneficial to have scientific evidence that dogs are better off not being kenneled in situations where alternatives exist.

For the record, I don't equate crate training with kenneling. Confining a puppy or dog that hasn't been housetrained to her own cozy crate for a few hours is very different from routinely housing a dog in a boarding kennel like the one described in the U.K. study. A crate-trained dog, once housebroken, should be allowed to go in and out of her crate at will. If your dog has been properly crate-trained, she'll view the crate as her own safe and private little den.