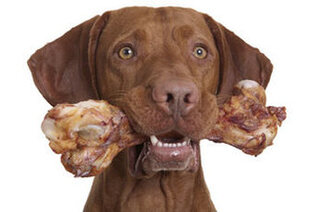 Good morning! I’m filming this video from my kitchen this morning as I make bone broth for my dog, Ada.

I thought it would be a good idea to show you how to make bone broth, in case you ever have a situation in your own life in which bone broth could provide excellent nourishment -- perhaps to help a pet recover from illness, or to provide nutrition for an older animal with a declining appetite.

Bone broth is a source of nourishment that has been around for hundreds of years. Some of you may already be making bone broth for your pets. There are lots of different ways to make it, and there really isn’t a wrong way. I’m going to show you the way I make bone broth, but you can also find variations on the Internet.
​You’ve probably heard that chicken noodle soup is kind of a “soul food.” When we’re sick, we want to eat foods that comfort us. And there’s research now that proves the science behind why certain types of foods are nourishing to people and comforting to pets.

When we cook a whole chicken and the meat falls off the bone, of course, that delicate, juicy meat is very good for anorexic pets. I use a lot of bone broth for my hospice patients. When animals are dying and no longer interested in eating or chewing food, often they’ll still lap broth.
​Bone Broth is Excellent Nourishment for Sick, Finicky and Older Pets

This morning I’m making bone broth because my healthy eight-year-old pit bull, Ada, is allowed to wander around our property, which is over 40 acres. She doesn’t go far, but she does get into grass, poop, and dirt. Ada’s been throwing up the last couple of days -- she barfed five or six times yesterday. She’s not feeling well. We did confirm there’s no blockage in her digestive tract, which means she doesn’t need to go to surgery, but her GI tract is inflamed. She’s also had some diarrhea. So we fasted her yesterday, and now I’m going to make bone broth and offer it to her as her first food after fasting.

Bone broth is a great first food for animals recovering from GI irritation or illness. And if you have a pet that’s finicky, you can also use it as a topper on food. If you have a pet that doesn’t want to eat anything, feeding bone broth provides very concentrated nourishment and helps get the GI tract functioning again.

I’m going to use a whole organic chicken today. You can also use beef thighbones (called "soup bones" at the store). You can use whatever bones you wish. But when you cook the bones and the meat falls off, that’s a great first food for a sick pet, and of course, most pets love it. As you continue to simmer the bones, they release all their minerals and marrow into the water, and that broth becomes a really healthy, nourishing first food or end food, depending on when you offer it to your pet.

It’s important to understand that bone broth alone is not a balanced diet. Even if your pets absolutely love it, they need more than bone broth to be healthy. But it’s a great way for you to offer extra nourishment in a really palatable form.

Fill up your pot with water – a really big stockpot works well. How much water you’ll need depends on how much bone broth you want to make. I prefer to make bone broth fresh and use it right away, but you can also make it and freeze it. I prefer to make it fresh, so I’m going to make this today in a smaller stock pot. I’ve added my water.

As I mentioned earlier, you can use whatever bones you want. I bought a whole organic chicken from Whole Foods and will be using it for today’s bone broth.

I do recommend feeding organic meats to your pets whenever possible, because the pesticide residues are not going to be passed up the food chain. Also, happy healthy food animals produce healthier meats for our pets.

I’m going to rinse off my organic chicken, put it into the water, turn on the heat, and do a nice, low simmer for a couple of hours. Because Ada is hungry and hasn’t eaten in 48 hours, once the meat falls off the bones I’m going to offer her the meat and skin. Then I’ll continue cooking the carcass for another 24 hours on a very low heat.
​One important ingredient to add to your stockpot is vinegar – you need to add a little bit of vinegar to the water. Acetic acid (vinegar) helps leech the minerals from the bones into the stockpot water, which is ultimately what you’ll feed to your pet. Important note: you should never feed your pet cooked bones. After boiling the bones down to the point where they disintegrate and dissolve, you should throw out any remaining bone fragments.

The goal is to extract as many minerals as possible out of the bones into the broth water. What we do to help extract the minerals out of the bones is add some acetic acid (or vinegar). I’m using Bragg raw apple cider vinegar. I like Bragg because it’s raw, unfiltered and unpasteurized, but you can use whatever vinegar you have in the house. Use about a teaspoon per gallon of water. (As you can see, I’m not a measuring cook, but I have enough to get the job done with the minerals.)

Now I’m going to cover my pot, turn on the heat and cook the chicken until the meat falls off the bone, which will be in about two and a half hours. I’ll stir it occasionally while it cooks.
Once the bones are separated from the meat, I’ll remove the meat and some of the broth. Then I’ll add more water and continue cooking to make a second round of broth.

It’s been about two and a half hours, and this is what my broth looks like. You might be able to hear my dogs getting excited about the broth in the background! The meat isn’t all the way off the bone yet, so I’m going to let the chicken simmer for another couple of hours since I’m cooking at a bit lower temperature than I usually do. But the broth is looking pretty good. You can see that the fat is rising to the top, and the skin is coming off the chicken. Some of the meat has fallen off the bone. I’ll check it again in another couple of hours.

Now the chicken has been cooking for about four and a half hours. All the meat has fallen off the bones. I have a second pot here to collect the bones and skin. Once all the bones have been removed, I’ll feed the meat and broth to Ada for the first round and cook down the other pot of bones for the second round of broth.

Now I’ve removed all the extra bones and skin not broken down through this first round. I’ll serve up a nice bowl of broth and juice and offer it to Ada as soon as it cools.

For my second round of bones, I’ll put everything in the pot that didn’t get completely broken down. Then I’ll add more pure water, another splash of vinegar, and repeat the process.

For these bones to have the minerals leached out, I’ll probably need to simmer them for the next 24 hours. So we’ll see what this looks like tomorrow morning.

And here’s the second round of bone broth. I took the bones and skin left after the first round, added more water and vinegar and cooked it on low heat for the last 24 hours. There are still some bones in the broth, but they’re very soft.

I prefer to run this second round of broth through a strainer, drain off the fluid, let it cool, and feed it to my pets. Some people like to put their second round of broth in a blender to grind down the remaining fine, soft bones, because cooked bones can be a choking hazard. But I don’t feed cooked bones to my pets at all. So what I’m going to do is just drain off the liquid, let it cool, and feed it to them.

All my pets love bone broth. My kitties love it. My dogs love it. It’s a great food to offer not only as a natural mineral supplement, but also as a bland and nutritious diet for pets who aren’t feeling good, who don’t have much of an appetite, or who are finicky.

And now you’ve seen how I make bone broth!
​