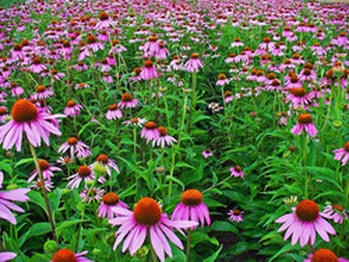 ​Echinacea extract has long been used for infections and as a blood purifier by Native Americans. Today it is the best-selling herb in America and is used extensively to stimulate the immune system to help fight viral and bacterial infections. Echinacea has also traditionally been used to heal wounds and skin problems, and reduce inflammation. Echinacea appears to fight viruses in two ways: It contains three compounds with specific antiviral activity—caffeic acid, chicoric acid and echinacin. Root extracts of echinacea have also been shown to act like interferon, the body’s own antiviral compound.  In addition, echinacea is an immune stimulant that helps the body defend itself against viral infection more effectively.
​Echinacea, also known as coneflower, is a medicinal plant that has been used for centuries to help keep the immune system active and healthy. Echinacea contains a compound known as echinacein which protects healthy cells from viruses and bacteria that are trying to invade them. Echinacea is particularly beneficial in helping the body heal quickly from colds, flu, sore throat, sinus infections, sinusitis, hay fever, bronchitis, canker sores, enlarged lymph glands, ear infections, gingivitis, enlarged prostate, urinary tract infections, and yeast infections. Echinacea is also a blood purifier and has anti-inflammatory properties. As a topical disinfectant and analgesic, Echinacea can be used as an ointment or salve to help heal reduce the pain and swelling associated with psoriasis, eczema, skin irritations, boils, scrapes, wounds, bug bites, bee stings, sunburn, and hemorrhoids. As an herbal supplement, echinacea can be taken as a capsule, tablet, extract, tincture, or tea.

​Due to its powerful immune boosting abilities, its best to only take echinacea for a short period of time, usually from a few days to a few weeks, depending on your illness. This short duration will activate your immune system, but also protect it from becoming overstimulated. If you are fortunate enough to have an echinacea plant growing near where you live, the plant and roots can be dried and used as a medicinal tea.