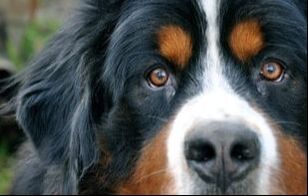 Brain tumors in dogs are as common as they are in people, and are the most common form of tumors found in dogs. This page looks at the possible causes, risk factors, symptoms, diagnosis and conventional treatment of brain tumors in dogs. Natural remedies that have immune-strengthening properties are also explored.

Like most forms of cancer, brain tumors can be either primary (originated and developed in the brain), or secondary (aka metastatic brain tumors). Secondary brain tumors occur when cancer cells spread to the brain from a primary cancer in another part of the body. The most common form of primary canine brain tumors is meningiomas, which are tumors that arise in the meninges which surround the brain and spinal cord. Other commonly reported primary brain tumors in dogs include undifferentiated sarcomas, gliomas, pituitary tumors, and ventricular tumors (eg, choroid plexus papillomas, ependymomas).

Signs and Symptoms of Canine Brain Tumors
Depending on the part of the brain affected, dogs with canine brain tumors show an array of signs and symptoms. However, seizures, which can be severe, are one of the most common symptoms associated with brain tumors in dogs. If an older dog (e.g. 10 years or older) has had seizures for a month or two but is otherwise healthy, then suspect brain tumor. Some other symptoms to watch for include: An unsteady gait and difficulty in climbing stairs and walking on uneven ground. Sudden and dramatic behavioral changes (e.g. a normally gentle dog may suddenly become aggressive; a normally quiet dog may bark incessantly). Change in appetite - Refusal to eat or excessive eating. Lethargy. Loss of eyesight, hearing and sense of smell. Getting lost in previously known places and not recognizing familiar faces. Having "accidents" in the house even though the dog has been toilet trained. Whining or whimpering (due to pain). Scratching or shaking head or rubbing it against objects. Read this dog parent's first-hand description of the numerous telltale signs and symptoms of a brain tumor in her dog. Also read this post to see how the behavior of a dog with a brain tumor can change suddenly.

There are no definitively identified causes of brain tumors in dogs. However, veterinarians suspect the following to be some possible causes:

Serious injuries and trauma to the head.

Exposure to radiation and electromagnetic field.

Some risk factors for canine brain tumors include:

Age appears to be a risk factor for brain tumors in dogs - 95% of canine meningiomas occur in dogs over 7 years old.

Brachycephalic (short-nose) breeds such as Boxers, English Bulldogs, and Boston Terriers, seem to have the highest incidence of brain tumors among dogs and other domestic animals. For some reasons, these short-nose breeds are especially prone to glial tumors.

Understandably, not all brain tumors can be removed surgically. Tumors can only be removed if they are located in an area that can be reached safely. There are two considerations for this:

The proximity of the tumor to the surface of the brain.

The proximity of the tumor to critical areas of the brain.

Thus, tumors that are on the brain surface are more likely to be removed successfully by surgery. To reach a tumor deep within the brain, a large area of healthy brain tissue will have to be cut through, the effect of which may be devastating for the recovery of the dog patient.

Many dogs recover after surgery without much complication, although sometimes dog parents have reported some kind of "personality change" in their dogs after surgery.
​Radiation

For a tumor that is deep seated and therefore poses significant surgical risks, radiation therapy can be used to slow down the growth rate of the tumor. Radiation can result in dramatic and rapid improvement of signs. Unfortunately, radiation alone usually cannot destroy the tumor completely. The dog patient may go into remission, only to suffer from a recurrence of tumor growth 8-14 months later. Also there may be some side-effects caused by radiation, such as occasional nausea, mouth ulcers, or ear infections. At University of Florida's Evelyn F. and William L. McKnight Brain Institute, a rather new radiation therapy is now available in which a 3-dimensional ultrasound guidance system is used to accurately pinpoint the tumor's location. Therefore, radiation beams can be targeted precisely at the tumor cells, leaving the surrounding tissues unharmed. Also, since high-dose, precisely targeted radiation treatment can be given in one session, the dog does not have to be treated repeatedly over a period of several weeks as is required in other radiation treatment protocols. This is especially good news for older dogs since radiation treatment requires anesthetic to keep the dog patients from moving, and the single treatment avoids repeated anesthesia.

As the brain is a very well-protected site, there are not too many drug choices that are effective in treating brain tumors. Recently, there is a drug called temozolomide that may be effective in treating gliomas. For other types of tumor, drugs are primarily used to lessen some of the symptoms caused by the tumor. For example, to reduce brain swelling, anti-inflammatory drugs such as prednisone will be prescribed. To control and manage seizures caused by the tumor, anti-seizure drugs such as phenobarbital will be used. By relieving some of the symptoms, the dog patient can feel better. However, understand that these drugs do not destroy the tumor itself and the therapy may only give the dog patient temporary relief of a few months.