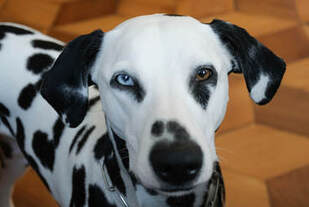 We are asked many, many questions about the diagnosis and treatment of pancreatic diseases in the dog, specifically, those dealing with the digestion and absorption of nutrients. Such diseases are termed pancreatic insufficiency, exocrine pancreatic insufficiency, and maldigestion syndrome.
​
The pancreas has many glandular functions, some obvious and well known and others that are obscure and not understood at all. We classically think of the pancreas as the producer of insulin, and an insufficient production of that hormone leading to diabetes mellitus. For many dog owners, diabetes is easy to understand since they can think of it in terms of the disease seen in our fellow humans. Many people, however, have difficulty understanding diseases that affect the ability of the organ to produce the various enzymes that allow humans, dogs, and cats to digest their food.
​Function of the pancreas
Certain cells of the pancreas called 'acinar' cells produce the important digestive enzymes utilized by the dog's body. The function of the enzymes is to break down food in the intestine into smaller molecules. The major digestive enzymes are protein molecules that are produced and stored in the pancreas. They include trypsin, chymotrypsin, amylase, and lipase. The trypsin and chymotrypsin break down protein molecules, the amylase breaks down starches, and lipase does the same to fats and triglycerides.
Breaking down the molecules of food into smaller sizes is an important part of the overall digestive process and allows nutrients to be absorbed by the cells that line the intestine. The nutrients are then passed from those cells into the bloodstream. There they can be transported throughout the body for use by the various tissues. When a dog eats a meal it stimulates the release of these enzymes. They flow from the pancreas into the anterior small intestine through a small tube called the pancreatic duct. Only after they reach the lumen or center of the intestine does their functional existence begin.
​What causes pancreatic insufficiency?
There are several potential causes of pancreatic insufficiency. Chronic pancreatitis (inflammation of the pancreas) is a common cause of pancreatic insufficiency. In some young animals (usually less than two years of age), the cells of the pancreas just start decreasing in number and functioning. The cause for this is unknown, but it may be an inherited condition. Many different dog breeds can be affected, however, it is more common in large breeds, especially German Shepherds.

Signs of pancreatic insufficiency
Regardless of its cause, the signs associated with exocrine pancreatic insufficiency are usually obvious and fit a distinct pattern. The disorder may come on gradually over a long period of time or it may develop rapidly over a period of a week or two. The animals with the condition show rapid weight loss caused by loss of body fat, and muscle atrophy. The hair coat has poor quality. There is usually diarrhea with the stools being light yellow or clay-colored, with the consistency of mashed potatoes. In some cases, it may even be watery, without any form at all. Depending on the diet, there may be large quantities of undigested fat present in the stool. The animal will seem constantly hungry and eat as much food as it can ingest at one time. It will often eat abnormal things such as plants, dirt, or its own feces (though pancreatic insufficiency is a rare cause of stool eating in dogs). The animal, in its appearance and behavior, typifies one that is starving to death, and in reality, he is.

In most cases, a presumptive diagnosis can be made from clinical signs alone and it is then proven by one of several available tests used to accurately diagnose pancreatic insufficiency.

These include:
​In its appearance and behavior, a dog with pancreatic insufficiency looks like one who is starving to death - and in reality, he is. Fortunately, treatment can easily be accomplished. Unfortunately, it is an expensive and lifelong proposition. Treatment involves replacing the dog's pancreatic enzymes with enzymes from other sources. Our only source of medications for these cases is products made through an expensive process, using freeze-dried and ground-up extracts of hog and cattle pancreases. These glands are harvested in meat packing plants and then processed solely for this purpose. They are formulated either into tablets or powder and go under such trade names as Viokase or Pancrezyme. They contain large quantities of the same naturally occurring digestive enzymes that are deficient in the affected pet. The enzymes begin working when they come into contact with food. The tablets are given prior to a meal or may be crushed and mixed with food. The powder is usually mixed with food and allowed to set for about 30 minutes before feeding.
​Response to therapy is immediate and the animal will usually return to near normal health. Unfortunately, cost becomes the major hurdle in treating pancreatic insufficiency. An affected dog, for instance, will need $60-100 worth of medication every month. Research is underway to develop synthetic digestive enzymes, and hopefully, will lower the price of treating these patients.
​​Since the deficiency is one of enzymes and is cured by the addition of the same enzymes back into the diet, many dog owners regretfully try other cures. There are many products, nutritional and otherwise, that advertise they contain natural enzymes which aid in digestion. Examples of these are K-ZYME, ProBalance, Prozyme, and so on. These really do contain real and natural enzymes and in normal dogs can be very useful nutritional supplements. However, they are not the enzymes associated with Pancreatic Insufficiency. This is a very specific disorder with specific enzymes needed to correct it. The general nutritional supplement will do no harm, but regretfully, they will do no good either.
​
We occasionally see patients in which the pancreatic insufficiency is only temporary and somehow resolves itself in 6 to 8 months, but these are rare exceptions. In these cases, it is thought that the cells responsible for the production of the enzymes have been irritated in some way but not permanently damaged. When they recover from the incident, whatever it was, their ability to produce these enzymes returns.

​Grumbling pancreatitis - Results from low grade, long-term pancreatic inflammation and usually shows up in older dogs ranging from approximately 4 to 8 years of age As noted above, this condition can affect any canine breed but is more commonly found in German Shepherds, Collie breeds and English Setters and is believed to have a genetic basis with no gender predisposition.  The cause for EPI is the same in both types.
Causes of Maldigestion Disorder in Dogs
The cause of maldigestion disorder in dogs, as well as exocrine pancreatic insufficiency, is the lack of certain digestive enzymes secreted by the pancreas into the intestinal system where they are needed to properly digest food and absorb the needed nutrients.  The lack of these certain digestive enzymes is caused by damage to certain types of pancreatic cells, reducing their ability to manufacture the required digestive enzymes.
​
Certain enzymes responsible for controlling digestion of the various categories of nutrients in foods are:
​
Diagnosis of Maldigestion Disorder in Dogs
In order to arrive at an accurate diagnosis, your veterinary professional will need a good, thorough history from you.

This history should include:
​
Your vet will do a physical examination and will order blood, urine and fecal sample testing.  There are many other health conditions and diseases which can have similar symptoms and your vet will need to rule them out to isolate the root or underlying cause. In this vein, he may wish to get imaging studies like radiography (x-rays), CT or MRI imaging to rule out other possible causes of the symptoms of which your canine family member is suffering.  Once he has collected and analyzed the results of his exam, your history and the testing modalities he has ordered, an appropriate treatment plan will be developed and initiated.
​Treatment of Maldigestion Disorder in Dogs
The treatment plan will likely consist of a multi-level approach which will include:
​
Perhaps the frequency of feeding that food. Once the missing enzymes have been identified, replacement of those missing enzymes will need to be implemented.  This can be done with a supplement which is available as powder, capsule and tablet forms. Mixing the supplement with the food is the best way to get it into your pet’s system - this makes the powder the most convenient but the tablets can also be crushed and mixed with the food and the capsules can be opened and the contents sprinkled into the food - your vet will advise you of the appropriate dosing and method of infusing it into the dietary regimen. An appropriate food will be recommended to be fed. This dietary change will be based upon the enzyme and the nutrient type which is not being digested; you might have to change to a low fat, or a low carb, or a lower fiber diet for example. Smaller and more frequent meals may be required to ease the load on the digestive system and to get the supplements into the system more efficiently. For example, you might have to feed your pet three times a day instead of once a day, being sure to include the supplement with each meal.

Recovery of Maldigestion Disorder in Dogs
Recovery and prognosis for your pet diagnosed with and suffering from maldigestion disorder in dogs is generally good if the condition is identified and treated appropriately and in a timely manner.  The vet will be concerned about improving the malnutrition condition of your pet, bringing him back to a relatively normal level of nutritional health. This will likely be done with dietary changes, the addition of enzyme supplementation and home routine changes. Over time, your pet’s condition should improve and you should begin to see a healthier version of your doggy family member return to you. Be prepared for the supplementation of the pancreatic digestive enzymes and the dietary changes to become a “new normal” for your pet for the rest of his life.