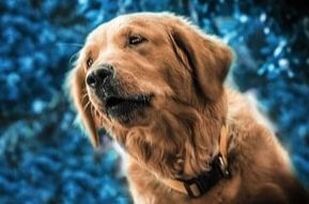 As winter approaches, many people will "winterize" their automobiles, including a change of antifreeze. Take care to keep both new and used antifreeze in a sealed container, out of reach of pets. Clean up any spills of antifreeze on driveways and other hard surfaces. Dogs and cats find antifreeze quite tasty and if they find antifreeze they'll drink it. Antifreeze is extremely toxic causing kidney failure that is often fatal in just a few days.

Very small amounts of antifreeze can be fatal. If a cat walks through a puddle of antifreeze and then licks its paws, it can ingest enough antifreeze to cause death.  About five tablespoons can kill a medium sized dog. If you see your pet drinking antifreeze, or are at all suspicious that your pet may have had access to antifreeze, contact a veterinarian immediately.

Signs of antifreeze poisoning depend upon the time after ingestion. In the first few hours after ingestion the pet may be depressed and staggering and may have seizures. They may drink lots of water, urinate large amounts and vomit. The pet may appear to feel better but in a day or two get much worse as the kidneys fail. Signs of kidney failure include depression and vomiting. The amount of urine they pass will often decrease to a very small amount.

The diagnosis of antifreeze poisoning is made by blood and urine tests although some of these tests become negative by the time kidney failure develops. Antifreeze poisoning should be considered in any free-roaming dog or cat with consistent signs. Treatment for antifreeze poisoning needs to be started as soon after ingestion as possible to be effective. The earlier treatment is started, the greater the chance of survival. Once kidney failure develops, most animals will die.
Animals who present to a veterinarian in kidney failure due to antifreeze poisoning can occasionally be saved with aggressive treatment. Some specialty veterinary practices offer dialysis which can be used to remove waste products that are not being removed by the diseased kidneys in an effort to keep the pet alive to give the kidneys a chance to repair. Whether the kidneys will repair themselves or not depends on how severely they are injured. Unfortunately the kidney damage caused by antifreeze is usually very severe and irreversible.  Kidney transplantation has been performed in dogs and cats.  There are several sites on the internet that describe transplantation.

Washington State University assumes no liability for injury to you or your pet incurred by following these descriptions or procedures. ​​
​This product is safer than the others. 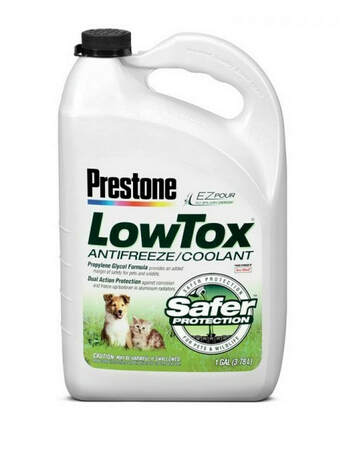 Prestone(R) LowTox(R) Antifreeze/Coolant is a technologically advanced antifreeze/coolant providing performance durability and protection against corrosion of all cooling system metals. Its patented propylene glycol based formula meets or exceeds ASTM industry protection standards and is excellent for all automobiles and light-duty truck applications. What separates Prestone LowTox(R) Antifreeze/Coolant from conventional ethylene glycol antifreeze/coolants is the added margin of safety for pets and wildlife in the event of accidental ingestion. Label carries the Ani-Med logo.