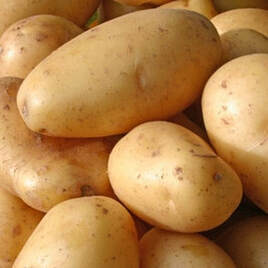 ​Beginning around 2006, the public has become more aware that grains are not a desirable ingredient for dog food. I have observed that many manufacturers have removed wheat, corn and other grains but are now using white potatoes as filler.

Removing grains does reduce some allergy problems but potatoes introduce another problem, an increase of cancer carcinogenic in the dog food. Heating potatoes causes a chemical reaction and produces acrylamide. This is a carcinogenic compound formed at cooking temperatures of about 250°F and higher in foods containing certain sugars and the amino acid asparagine (found in large amounts in potatoes and cereal grains).

The amount of acrylamide from potatoes in dog food might not be enough to warrant a warning label. But one must consider that a steady diet (twice or more a day) of these carcinogenics is not healthy.
​What is the difference between white potatoes, sweet potatoes and yams? I checked Wikipedia for “Sweet Potato” and the second paragraph states “The sweet potato is only distantly related to the potato”.  The sweet potato is a dicotyledonous plant that belongs to the family Convolvulaceae whereas the potato belongs to a starchy, tuberous crop from the perennial Solanum tuberosum of the Solanaceae family (also known as the nightshades).
​I have used sweet potatoes and yams as alternative ingredients in my dogs’ diet.  They help in the digestion of food and contain many additional vitamins and nutritious components than white potatoes. To the dietary world, sweet potatoes and yams are not considered potatoes.  As stated in Wikipedia: “ Besides simple starches, sweet potatoes are rich in complex carbohydrates, dietary fiber, beta carotene (a vitamin A equivalent nutrient), vitamin C, and vitamin B6.”

​250˚F in foods containing certain sugars and the amino acid asparagine (found in large amounts in potatoes and cereal grains). It forms during a chemical process called the Maillard reaction. Most dry pet foods contain cereal grains or starchy vegetables such as potatoes, and they are processed at high temperatures (200–300°F at high pressure during extrusion; baked foods are cooked at well over 500°F). These conditions are perfect for the Maillard reaction. In fact, the Maillard reaction is desirable in the production of pet food because it imparts a palatable taste, even though it reduces the bioavailability of some amino acids, including taurine and lysine. The amount and potential effects of acrylamide in pet foods are unknown.