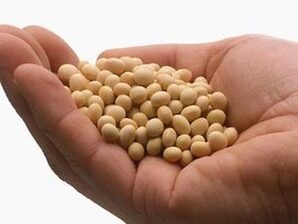 ​Why You Should Avoid Pet Foods Containing Soy Products

Soybeans and soybean-related products can be found in an increasing number of commercially available pet food formulas, dry, semi-moist and wet, including many beautifully advertised, big selling brands, as well as veterinary formulas and prescription diets.

Soy is a plant protein used by pet food companies to boost protein content and add bulk. Because plant proteins are less expensive than meat proteins, pet food manufacturers use them to increase profit margins.

The ingredient label might not even say soy, as it is commonly listed as vegetable broth, textured vegetable protein or TVP, and perhaps other aliases.
The majority of experts on pet nutrition agree soy isn't good nutrition for cats or dogs. It is considered a low-quality, incomplete protein well known to create food allergies in pets.
According to Sally Fallon and Mary G. Enig, PhD, authors of Cinderella's Dark Side:

"The soybean contains large quantities of natural toxins or "antinutrients." First among them are potent enzyme inhibitors that block the action of trypsin and other enzymes needed for protein digestion. ​​
These inhibitors are large, tightly folded proteins that are not completely deactivated during ordinary cooking. They can produce serious gastric distress, reduced protein digestion and chronic deficiencies in amino acid uptake. In test animals, diets high in trypsin inhibitors cause enlargement and pathological conditions of the pancreas, including cancer. Soybeans also contain haemagglutinin, a clot-promoting substance that causes red blood cells to clump together. Trypsin inhibitors and haemagglutinin are growth inhibitors."
​A study was conducted in 2004 at the University of Pennsylvania to determine the amount of phytoestrogens in 24 random commercial dog foods. Results revealed all the foods containing soy ingredients had concentrations of phytoestrogens in large enough quantities to have a biological effect on the pet.
Soy has been linked to gas and deadly bloat in dogs. It is high in purines and is therefore a completely inappropriate protein source for urate-forming dogs. It is also high in silicates and promotes the formation of silica stones.
The carbohydrate action of soy can cause a rise in blood sugar in many cats. Soy is also linked to thyroid damage, and since hyperthyroidism is common in kitties, this is yet another reason it should not be part of a feline's diet.
The ingestion of soybean products is also linked to seizures in both dogs and cats.
I hope I've given you a more complete understanding of why avoiding pet foods containing soy products is best for your favorite four-legged companion.

In my opinion, the potential risks associated with feeding soy are simply unacceptable … especially when you consider your carnivorous cat or dog prefers and receives a much higher level of nutrition from animal protein sources.

This is a whole topic all on its own. Soy very high in estrogen and also one of the most genetically modified foods on the planet…also heavily saturated in pesticides (poison) if the soy is not organic. Even organic isn't always clear.