Some call menadione a dog food necessity. Yet others reject it as a dangerous toxin.
So, what exactly is menadione? And why is it being used in some dog food recipes and not others?
Menadione is actually a vitamin. It’s the man-made version of an essential nutrient commonly known as vitamin K — or more precisely, vitamin K3.
However, K3 is just one of five known versions of vitamin K. The three most common ones found in dog food are:

Vitamin K1 – naturally found in green leafy vegetables
Vitamin K2 – produced by bacteria living inside a dog’s gut.
Vitamin K3 – menadione, the man-made synthetic version
Vitamins K1 and K2 are considered natural and fat soluble. So, they’re chemically ready to be used by the body just as they are.

However, vitamin K3 is synthetic. And all forms of the chemical must first undergo the cellular process of alkylation before they can be used by the body.
Menadione — a Nutritional Necessity?

The controversy over menadione appears to be driven by two opposing views.

Supporters tend to see menadione as a necessary supplement that dog food manufacturers should include in their recipes.

Advocates also claim menadione should be considered safe because toxic levels are a thousand times greater than the recommended daily dose.

Or a Dangerous Toxin?

Critics see menadione as only a precursor to the vitamin’s more natural versions. They cite studies that make rather disturbing claims. They worry that menadione…

One company selling menadione warns its human buyers that menadione is “toxic to kidneys, lungs, liver, mucous membranes. Repeated or prolonged exposure to the substance can produce target organ damage.”

​Banned from Use in Human Supplements

According to a peer-reviewed article published in 2004 by the Linus Pauling Institute at the Oregon State University:

“Although allergic reaction is possible, there is no known toxicity associated with high doses of the phylloquinone (vitamin K1) or menaquinone (vitamin K2) forms of vitamin K. The same is not true for synthetic menadione (vitamin K3) and its derivatives. Menadione can interfere with the function of glutathione, one of the body’s natural antioxidants, resulting in oxidative damage to cell membranes. Menadione given by injection has induced liver toxicity, jaundice, and hemolytic anemia (due to the rupture of red blood cells) in infants; therefore, menadione is no longer used for treatment of vitamin K deficiency. No tolerable upper level of intake has been established for vitamin K.”

The FDA has banned the use of menadione from over-the-counter supplements because large doses have been shown to cause these dangerous biological effects.
​A Wolf in Sheep’s Clothing

Unfortunately, it can be difficult to spot menadione in a dog food recipe. That’s because manufacturers frequently list the vitamin in rather cryptic fashion.

What’s more, you may even come across menadione connected to innocent phrases on an ingredients list like… “a source of vitamin K activity”.
​The Bottom Line

So, what should you do when you find dog food recipes containing menadione?

Due to the contentious nature of menadione and because there are currently no AAFCO requirements to include the supplement in any dog food, we’d suggest shoppers avoid dog food products that contain this controversial ingredient.

Menadione, also known as vitamin K3, is a synthetic version of vitamin K. The natural occurring compounds are vitamin K1 (Phylloquinone, from plant sources) and Vitamin K2 (Menaquinone, synthesized by bacteria in the digestive tract and absorbed by the body). Technically menadione isn't even a vitamin, but a precursor that is converted in the body after ingestion. Natural vitamin K is fat soluble, while menadione derivatives (pure menadione can not be processed) are water soluble and bypass the natural pathway of utilization by the body.
Why is it added to pet food? 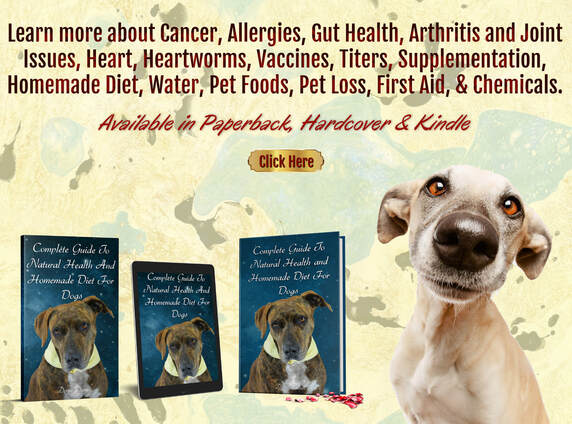 Menadione is added as an inexpensive vitamin K supplement in commercial foods. The common statement as to why it is added is "to help with blood clotting", yet it is scientifically proven that the effectiveness of menadione on blood clotting is inferior. Even veterinarians will administer vitamin K1 as an antidote to dogs who have for example ingested rat poison, which causes internal bleeding.

Manufacturers who use menadione in their products also like to claim that it is "more stable" than natural vitamin K and has "more nutritional value". Not a single one of them has acknowledged the scientifically proven side effects of this substance.

It is simple to come to a conclusion about the truth in these statements when you consider that
not all pet food companies add menadione to their foods and dogs have eaten these products for years without developing deficiencies the National Research Council was not able to demonstrate a dietary requirement for vitamin K in dogs during tests when natural ingredients were fed and fish meals, liver and green plant supplements (e.g. alfalfa, kelp and other seaweed, nettle leaf, blue-green algae, spirulina) are rich sources of natural vitamin K.
http://www.sciencelab.com/msds.php?msdsId=9924604 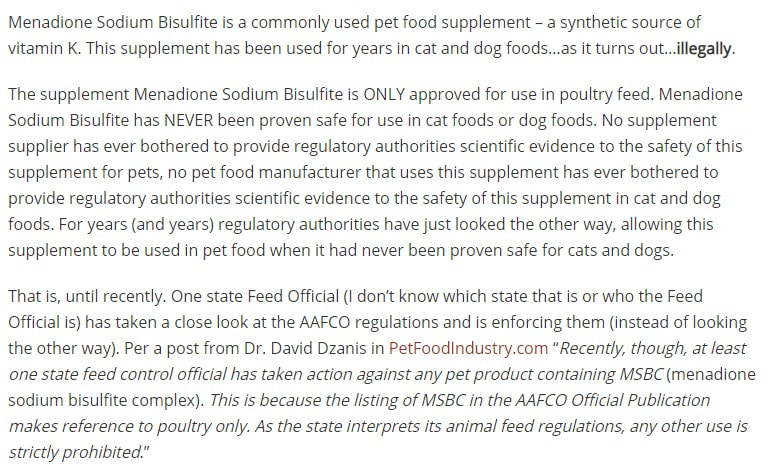